This is what I was doing for the last couple of months. Our game iOS Dream of Pixels, which I did all the art for, is out. But the main reason I'm posting it here, is that the game got featured on front pages of major sites like Mashable and even twice on   Kotaku    Kotaku - Gaming App of the Day

Here is the official trailer I made:


And the page of the game DreamOfPixels

I did a little sculpting in Zbrush and participated at the CGHub character challenge. I made this Hulk sculpt. Doing this piece I learned quite a lot and I advice anyone who wants to grow as a 2D artist to try some sculpting either in a 3D environment or even better in real life from clay. It will help you to train your sense of space. You can also get a lot just from observing how the light falls on an object and makes shadow. Great stuff. 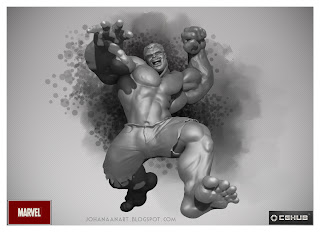 Lately I've been doing some anatomy studying so to break the chain I did a little color study. Original art is of course by Gil Elvgren (on the left). I'm a huge fan of his work and I think he's a great artist despite the fact that most of his work is known for pin-ups. His girls are awesome and the fact that he can enlighten their faces with such energy and cute mischief is just amazing. I love it. That's why he's one of the greatest.

I chose this particular picture because I wanted to practice color perception, my blending skills, human anatomy,  painterly style and drawing reptiles. Say what ??? That's right. The fact is that most of the guys including me, don't even notice the little turtle fella under the hat. And that what makes this picture so fun. I hope you enjoy it ;) 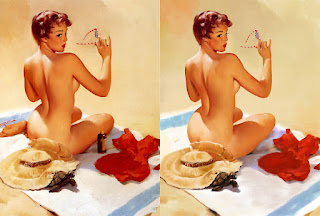 Continuing with my Avengers mini series. This time a famous fight scene with Black Widow. 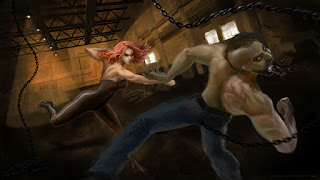 Just a simple render of a pinup girl for the collegues at work. 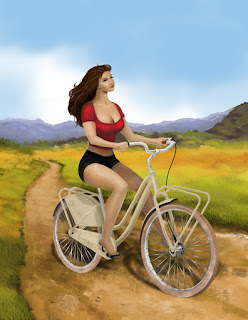 Just some value study with a reference image from the Prometheus movie. 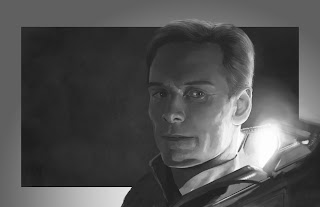 Snow White in the Dark Forest

Watched the movie Snow White and the Huntsman and it was quite a surprise. I loved it actually. Started to do some concepts. Here's one that got finished. 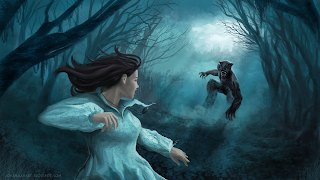 At first I wanted to do a tribute to the movie but when I started to paint the Snow White she started to look more like Sarah from one of my favorite movies The Labyrinth with David Bowie and Jennifer Connelly. Also the creepy atmosphere and the fact that Kristen played in the Twilight kept pushing in my mind so instead of a forest troll I painted some sort of mixture of a vampire and a werewolf. I hope you still like it ;)

Continueing with Avengers mini series. This time the Hulk. 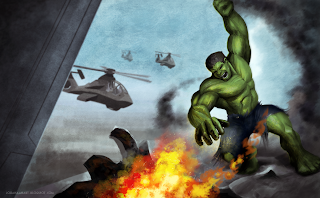 I'm making a mini series of my favourite characters from the Avengers. I'm starting out with Ironman. 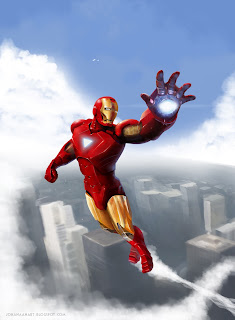 This is my version of Molly Millions the character from William Gibson's Sprawl Trilogy.

As you can learn from wikipedia, she's a lean, athletic, attractive woman who appears at first glance to be wearing mirrored sunglasses, Molly has in fact had her eye sockets sealed with vision-enhancing mirrored lenses that were surgically attached to her face by the skilled black-market surgeons of Chiba City. To accommodate the inset lenses her tear ducts have been re-routed to her mouth; consequentially, on the very rare occasions Molly cries, she spits out or swallows the tears instead. She never lets others touch the lenses as it would leave messy fingerprints requiring extra cleaning. Her sensory input, metabolism and reflexes are also artificially heightened by means of electronic implants and exotic forms of advanced surgeries and other medical procedures. Molly also sports razor-sharp retractable claws underneath her fingernails: ten double-edged blades four centimeters in length.

I tried to achieve this moody, heavy, smoky atmosphere like in the old film noir movies and of course like in the Blade Runner. I also wanted to emphasize her nature of being a cold-blooded killer with the fact that she doesn't care much that she just murdered a person and that her arm is injured, she just wants a nice piece of strudl from the fridge while she smokes her favourite cigarete.

This painting was made for the Bloodsport competition on Crimson Daggers . 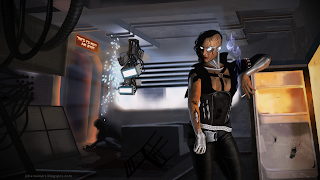 Image I had in mind since I watched The Artist in the cinema. 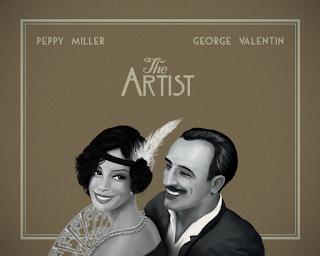 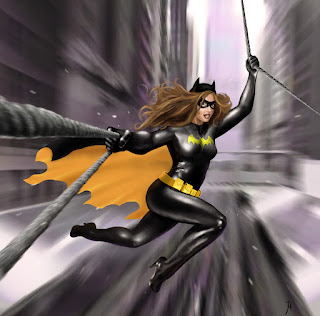 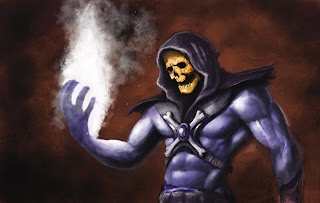 I've been a great fan of Masters of the Universe when I was a child. This is one of my favourite villains. Skeletor.
Avtor Jan Hadzic ob 11:01 1 komentar:

I wanted to go a bit further from the portraits, so I made this painting of a Paladin girl. 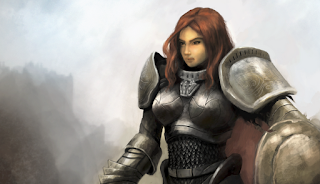 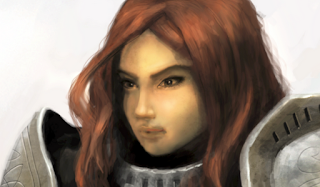 You can also check out the whole image on my DeviantArt profile .
Avtor Jan Hadzic ob 02:40 Ni komentarjev:

Since the last post I finished the DK portrait, so here are some new steps through the proces. On the first picture I paid a lot of detail to the eyes and a little less on the nose and mouth. The face skin is refined from the last picture from previous post the same way as you can see the difference on the refinement of the body between the first and second picture in this post. 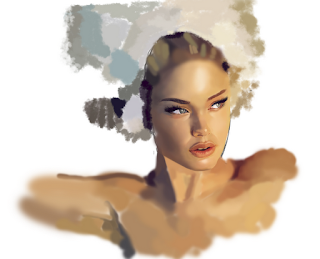 I cleaned up the body silhuete and added some more detail to furry hat. 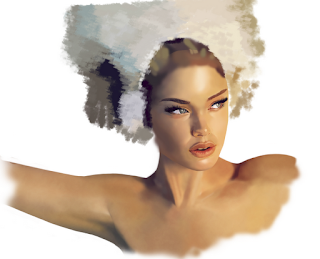 Even more detail on the hat and some background colors. 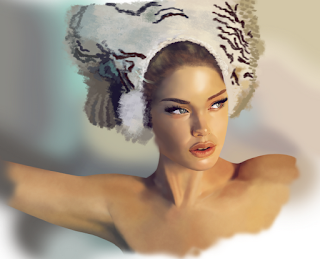 Final detail on the hat and the hair. 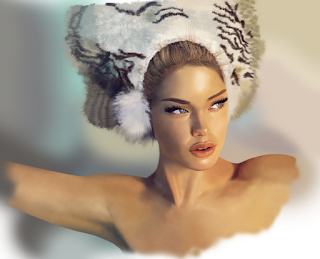 If you want to evolve as an artist you should experiment a lot and try different things. There are at least a few reasons for that. Finding your own unique style gives you recognition in a wider public community. Even great artists like Dali, Van Gogh, Picasso and many others had to try different styles and techniques before they found their own that made them known throughout the world. The other reason is freeing your mind and yet another reason is practice. Practice in the sense of maintaining the talent you have and in the sense of learning new things that are your weaknesses or even doing things you haven't done before.

In this post I'm showing the process of creating another color painting. This time a portret.
First I draw some construction lines and then I do a line sketch on another layer. 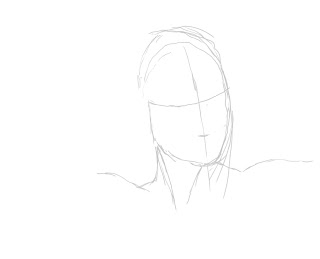 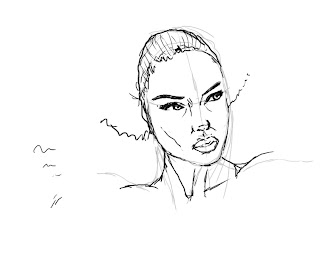 At this point I check if everything is like it is meant to be. I do some minor transformations and do some refinement. After I'm satisfied I apply some color blobs and I do not worry much about the roughness of color blending and details of the linework. 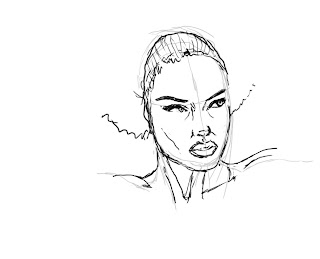 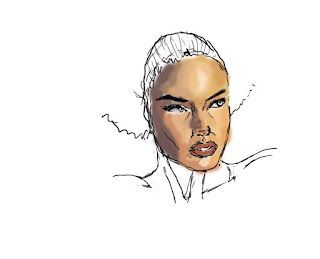 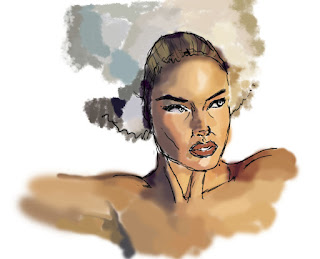 After the basic colors are applied I lower the opacity of the line layer and I start refining the work with colors as the general idea is to get rid of the lines. 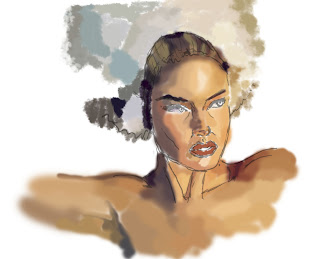 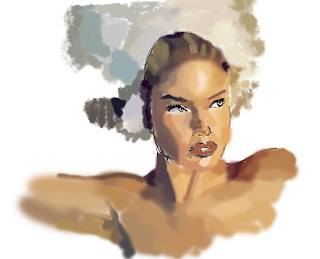 Ok, so this is it. I finished the painting. From the last post I painted Zevs and Kratos, made some adjustment layers, added some effects and tweeked the details. I guess I could work some more on it but I think it's quite good for a first painting done with Wacom. I spent quite a few hours on it but comparing to the old technique I used to practise (oil painting on glass) this is quite refreshing and very fast. It's time to move on and make some stuff. Hope you like it ;) 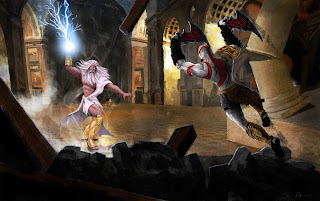 God of War 3 Zevs vs. Kratos painting in proces

As the painting progresses I make some minor changes and keep the things that seem ok. Once I get the basic colors done I define the space by puting some real architectural elements in the background. As the story is happening in Greek Olympus I want to get the feel of an ancient empire. Because the Roman and Greek styles were influencing each other at that time I use photos from my trip to Tuscany as a reference. The basic composition at this point seems right. I keep the perspective construction lines at all time so I check everything is ok. Sketches of Zevs and Kratos are more defined and I put some basic colors for both characters. 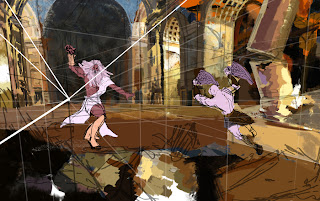 Although I want to emphisize Kratos is smaller that Zevs the overall feel doesn't seem right. The painting needs more energy. Putting Kratos more closer makes him bigger and the scene looks more dramatic. I refine the architecture and paint some demolished stones and beams to define the idea of a fight. 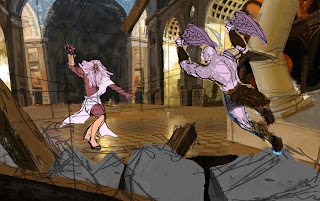 If I don't count the introductory text, this will actually be my first post. So lets get started :)

I wanted to test my Wacom Intuos 4, so I decided to create a painting dedicated to one of my favourites games from the recent past, which is God of War 3. You can find most of the lead artist that visually created this game on the right.

In the next few days I'll be posting pictures of the proces so you can see how it progresses. So for the start I made a very rough sketch. It serves as a basic composition tool, so I can see which elements I'll have on the painting and where they will be. I also made some basic distorted perspective construction lines that will help me to keep the painting in balance. 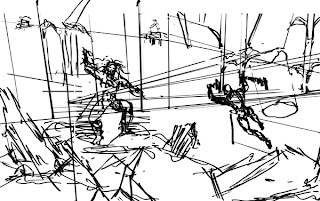 After the sketch is done I usually start to pick up some colors to set the mood and to get the overall feel of the whole composition. As I did with the sketch I also want to keep the colors very loose. As the work progresses so will the art grow. Art is always a process. You never know where you gonna end up, but if you work hard it's gonna be some place nice. Usually it is hard to explain to your client, what your idea will look like, but if you keep it in sketch mode and put on some basic colors for the mood, he will get some basic idea where it could go. So it's good to leave something to the imagination of your client. At the end if you work closely and you listen to what does he have to say, you can always surprise him with the final result. 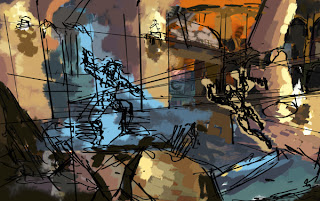 
This blog is mainly dedicated to concept art, although I do not promise I will not share other forms of artistic expresion. Here you'll find people and companies that I admire, people that motivate me through their work and hopefully some of my work. Enjoy the journey as it begins ;)
Avtor Jan Hadzic ob 01:17 Ni komentarjev:


Here's what they say on Kotaku about the game Dream Of Pixels I worked on as an Art Director.